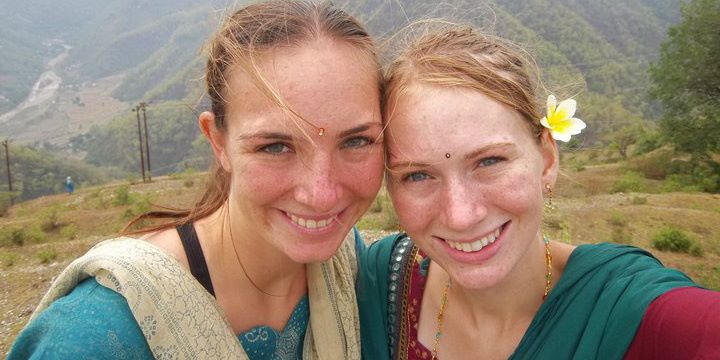 Down down down. Once again we hit the dangerous Rhotang Pass from Leh to Manali. One of the world's most dangerous highways, we wore down the roads over five passes of the Himalyan giants; all the while focused on the end goal: chocolate momos in Manali. After five punctured tyres and blown shocks, our mini bus brakes gave out only 1km from our destination.

But our shaky late night arrival in Manali was rewarded the next day with delicious momos, including the long anticipated chocolate variety. We picked up another Canadian trekker with a similar itinerary to us and together devoured thirty momos cooked by a maternal Ladhaki woman and her tough mother. They operate a small two table joint with plastic chairs called the 'Tibetan Kitchen.' We'd been before and already each have a pair of the woolen socks the grandmother knits while waiting for customers. To ensure every customer is satisfied, something the food already guarantees, they have a toilet with the world's best view available, located down the street up a flight of stairs. The toilet is in a small washroom with a floor to ceiling window looking out to the Himalayas and the farms below.

Before leaving Manali, Jen, in desperate need of a haircut after a long battle with lice and low quality shampoos, seeked out a respectable beauty salon. Unfortunately, the haircut left me, someone who has NEVER cut hair before, giving an impromptu lesson to two estheticians as I snipped away to salvage the nearly fatal bowl cut.

And so we continued, humbled by our bad judgement we did not know what to expect in McCloed Ganj. Another rough night had us at the hands of a tourist hunter when we arrived before the sun in the city of Tibet-in-excile. Fortunately, we woke to a bright dry room; outside our first real monsoon was flooding the streets. Although monsoons are promised daily, we were blessed exclusively with sunshine and magical mist during our stay.

Our time in McCloed Ganj (and around) was both relaxing and exciting. We read Harry Potter (just the second half of the Deathly Hallows) out loud to each other overlooking incredible sunset views from the Dalai Lama's resident pizza cafe. And yes, our smoked cheese and spinach pizza was prepared by monks and, yes, it was very tasty (despite a disclaimer that suggested incompetent staff).

In McCloed Ganj we sampled many other culinary delights as well, including momos made by us (thanks to Lhamo's cooking class) and an incredible mountain thali which was unnecessarily delicious; we were ravenous after our ascent. You see, now that we're such expert trekkers, we easily did a last minute trek up Triund. We simply ignored Jen's toe injury, which was probably harder for her to do than me. Packed lightly, we stayed overnight at altitude in the kitchen of an already full guesthouse. We shared a summer solstice campfire with other guests and shared a bed with our host.

Our next adventure was the 04:00 bus to Amritsar. We ignored our strong desires to stay asleep when a 03:25 alarm nudged us out of McCloed Ganj. To our surprise we were joined at a most ungodly hour by Jamie Monks, a friend (who we last saw in Rishikesh), and five of his newest friends. We all wanted to sleep on the bus so we groggily tossed our luggage onto the bus's roof rack to maximize our leg room. An architect of sorts safely secured our bags and we were off. It wasn't until we arrived that a problem arose.

Jamie was passing down the luggage to receptive hands when the bus started to roll. Despite some ferocious protest by two girls, it kept going at a slow speed. Working quickly, bags came down one by one. My bag was last and all that was left was for Jamie to hand it down to me, but the bus was accelerating. In a panic Jamie, as gently as possible, lobbed everything I own in an arc towards the pavement. Fortunately an instinct kicked inside me, like a mother rescuing a baby; I gracefully caught up and snatched my bag out of it's descending arc just in time to spare my gifts from making fatal contact with the pavement. By the way Jamie made off the roof safely sometime later when the bus finally stopped.

And so it goes, in India you never know what you'll find; excellent service or incompetence, hospitality or hostility. However; I must declare that as a western woman there is always somebody looking out for me and I have experienced a whole lot more help than hinderance from India's 1.2 billion residents. This is epitomized by the unlimited policy of generosity adopted by the friendly Sikhs at the Golden Temple (see next blog).
Posted by Amelia Gwen at Saturday, July 02, 2011